Your app will have many scenarios that require no conditional logic. For example, examine door might always return the output, "It's a heavy wooden door." These "vanilla" scenarios can be completely defined within the Scenarios editor, but when you need conditional logic the Scripts editor is the place to start.

The Structure of a Script

You'll want to get familiar with the recursive structure of scripts:

Here's an example script from the Starter App template. It executes when a character examines the kitchen sink: 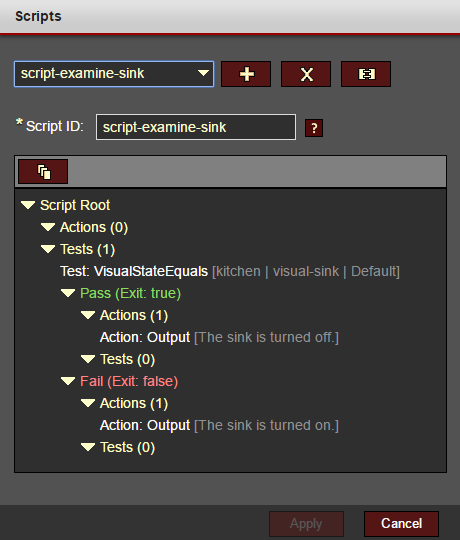 Note that the Pass/Fail results are also containers for additional actions and tests. This recursive structure gives you the power to create flexible, intelligent sequences.

When you open the Scripts editor and add a new script, you'll start with an empty tree. As you click on various nodes of the tree, buttons will appear which allow you add/edit/delete actions, tests, and results.

How Actions and Tests are Processed

When a script is executed, the script engine starts at the Script Root and performs the following steps:

Note that if the Exit On Complete option is checked on a Test, no subsequent tests in the script will be evaluated.

Now that you're familiar with the structure, check out the Actions and Tests available to your app: